He started his aikido practice in 1962 with Jean-Claude Tavernier, but very quickly he moved to his teacher – Masahiro Nakazano (7 dan aikido Aikikai). In 1968 he received 2 dan aikido Aikikai. Year later he left to Japan for six months to learn from the best teachers in Aikido Aikikai Hombu Dojo. He stayed there for seven years. 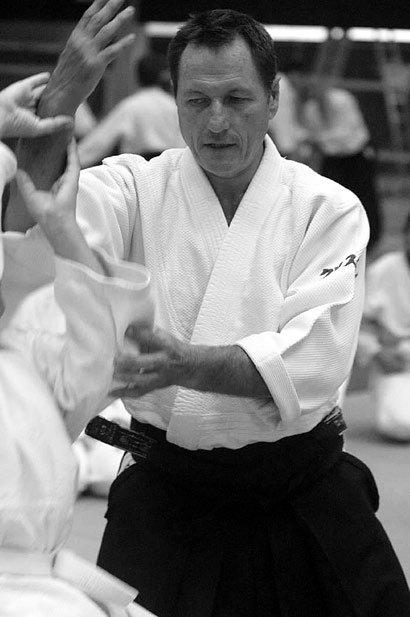 Since his coming back from Japan Christian Tissier gives regular classes in his dojo in Vincennes (near Paris) and lots of seminars in France and all over the world (also in Poland). His first visit in Poland took place in December 1990. In last years he has come to our country regularly. He taught a huge. He teached a huge group of great aikido teachers, both in France and abroad. He published six books in „Aikido Fundamental” series, three videotapes, two DVD’s, gave uncountable quantity of demonstrations (also this most famous – during Bercy martial arts festival in Bercy hall in Paris, which were trasmitted by Eurosport). His meaning for aikido popularization is undisputable. He created positive image of this art especially in France, but also in many other countries.

Bazylko sensei has had a pleasure to be sensei Tissier‘s disciple for many years since September 1990. Hard work for craft and technique started due to his first visit at sensei Tissier‘s dojo. With it, knowledge and skills came. In time also experience. Christian Tissier possess not only magnificient technical skills, but also a gift of giving them to others.